You are here:
caribbean weddingsRomance 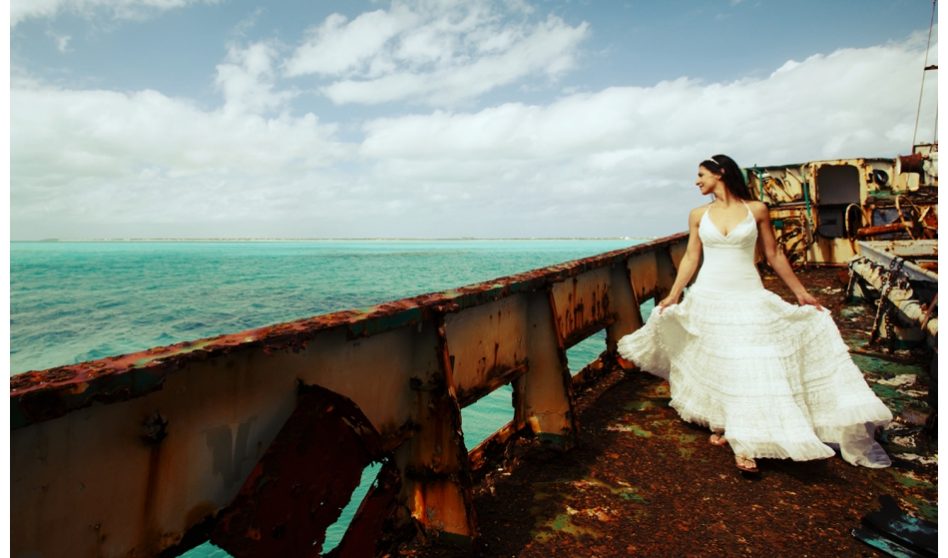 Ever heard of a wreck-the-dress photo shoot? Take your usual trash-the-dress shoot, throw a shipwreck in the mix, and voila!

We had the pleasure of doing our first Turks and Caicos wreck-the-dress shoot in January with a couple from California. You may remember ZD and AG from an earlier blog post. They’re fun, adventurous people who came to Providenciales to elope. And they were a perfect fit for an idea we had for a photo shoot involving an old shipwreck in the shallow waters of Long Bay.

The old rusted ship was beached by a hurricane several years ago and has since become a popular spot for boaters and kite surfers to visit. We thought it could be a beautiful location for a wedding photo shoot.

Two days after ZD and AG wedding, we arranged for a boat to take us out to the wreck to bring our idea to life. We had to climb to the top of the ship by some old netting hanging over the side before we carefully passed Zahiah’s wedding dress up. Rust has taken over most of the ship, so you also have to mind your step. But ZD and AG loved the adventure.

The juxtaposition of ZD’s beautiful white dress against the red, rusted ship, was even more stunning than we imagined. The couple also had planned on taking underwater photos on the day of their wedding, but the ocean was too rough. This was their opportunity, and they took it. Once we were done on the boat, they jumped in the ocean in their wedding clothes.

AG captured some footage of our first wreck-the-dress session with his drone . Thanks for a fun photo shoot, ZD and AG!

Thank you Richard Syme for your nautical assistance.